I gave a speech by MLK during my senior year of college, and I count that experience as one of my most significant accomplishments. I've posted the speech below.

And then the Greek language comes out with another word. It’s the word agape. Agape is more than Eros; it’s more than an aesthetic or romantic love; it is more than friendship. Agape is understanding, creative, redemptive goodwill for all men. It is an overflowing love which seeks nothing in return. Theologians would say that it is the love of God operating in the human heart. And so when one rises to love on this level, he loves every man, not because he likes him, not because his ways appeal to him, but he loves every man because God loves him, and he rises to the level of loving the person who does an evil deed, while hating the deed that the person does. 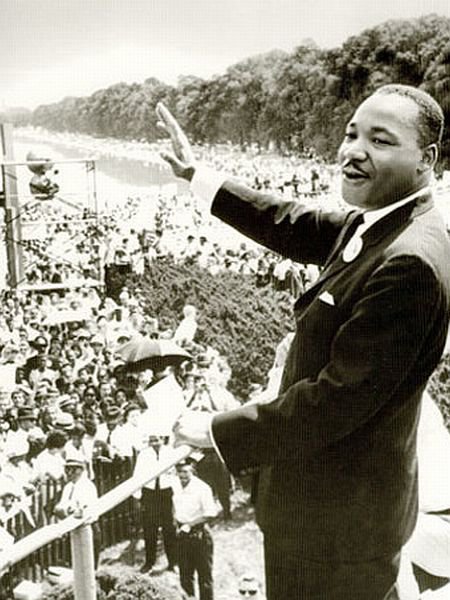 And I believe that it is this kind of love that can take us through this period of transition and we can come to that brighter day. This is what we've tried to do. In the midst of our struggle we haven't always succeeded, but somehow in some of the dark moments we have been able to stand up before our violent oppressors and say:

We know that in the final analysis God is not interested merely in the freedom of black men and brown men and yellow men; but God is interested in the freedom of the whole human race, and the creation of a society where all men will live together as brothers and every man will respect the dignity and the worth of human personality, and so the challenge ahead is to move out with a strong action program undergirded by a philosophy and methodology of nonviolence.

If we are to solve this problem really, we must continue to have a sort of divine discontent. Modern psychology has a word that is probably used more than any other word in psychology -- it is the word "maladjusted." And this word is the ringing pride of modern child psychology, and suddenly we want to live a well adjusted life in order to avoid neurotic and schizophrenic personalities.

It may well be that we need a new organization in our world: The International Association for the Advancement of Creative Maladjustment. Men and women who will be as maladjusted as the prophet Amos, who in the midst of the injustices of his day could cry out in words that echo across the centuries: "Let justice roll down like waters and righteousness like a mighty stream"; as maladjusted as Abraham Lincoln, who had the vision to see that this nation could not survive half slave and half free; as maladjusted as Thomas Jefferson, who in the midst of an age amazingly adjusted to slavery could scratch across the pages of history words lifted to cosmic proportions: "We hold these truths to be self-evident, that all men are created equal, that they are endowed by their Creator with certain unalienable Rights, that among these are Life, Liberty and the pursuit of Happiness"; as maladjusted as our Lord and our Master who would say to the men and women around Galilee: "He who lives by the sword will perish by the sword" and who could look into their eyes and say "love your enemies," bless them that curse you, "pray for them that despitefully use you." And through such maladjustment we will be able to emerge from the bleak and desolate midnight of man's inhumanity to man into the bright and glittering daybreak of freedom and justice.

And so I call upon you tonight not to be spectators on the sideline, not to be individuals who are looking on, but to be involved participants in this great struggle to make our nation a greater nation and to end all of the evils of racial injustice, poverty, and the evil of war.

I must admit to you that there are not always pleasant moments when you stand up in this struggle. I must be honest enough to say to you if you stand up in this struggle it may mean that you will have to suffer for righteousness sake.
The thing that must always console us is that as we struggle, we do not struggle alone. And there is something in our Christian faith to remind us of this: The God that we worship is not some Aristotelian "unmoved mover" who merely contemplates upon himself. He’s not merely a self-knowing God, but He’s an other-loving God working through history for the salvation of his children. And there is an event at the center of our faith which reminds us that Good Friday may occupy the throne for a day, but ultimately it must give way to the triumphant beat of the drums of Easter. There is something in our faith which reminds us that evil may so shape events that Caesar will occupy the palace and Christ the cross, but one day that same Christ will rise up and split history into AD and BC so that even the life of Caesar must be dated by his name.

Truth forever on the scaffold, Wrong forever on the throne,— Yet that scaffold sways the future, and, behind the dim unknown, Standeth God within the shadow, keeping watch above his own.

This is our faith, and this is what will carry us through.

- Excerpted from MLK's Address To A Methodist Youth Leadership Conference

You found the secret area!
As a reward, here is a picture of a dapper kitten